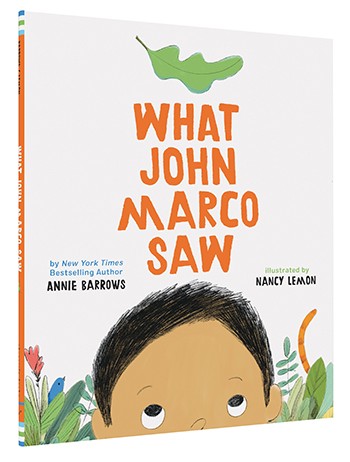 Annie Barrows, best selling author of the Ivy + Bean series invites us to a magical portrayal of one of those strang and giddy moments that makes an indelible impression on one’s imagination. Best of all, succeeds in proving that John Marco (and what he notices) is worth everyone’s attention (Publishers Weekly).

John Marco is small. And everyone around him is busy. Too busy to listen to John Marco.

John Marco is busy, too—noticing the world around him. Maybe everyone should slow down and listen to John Marco. If they do, they might discover some pretty amazing things. They just need to pay attention. Like John Marco does.

Bestselling author Annie Barrows has a singular talent for creating stories that speak directly to young readers. Here, in her first picture book, she celebrates the importance of slowing down as she reminds us that sometimes the smallest people have the biggest things to say.

Annie Barrows has written many books for children, including the New York Times bestselling Ivy + Bean series- which has sold more than 5 million copies. She lives in Northern California.

Nancy Lemon lives in Charleston, South Carolina. This is her second book.