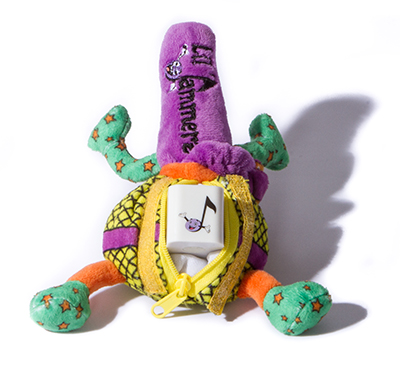 The idea for Lil’ Jammerz™, Bluetooth® musical infant plush toys, emerged after the birth of Melissa Croland-Brandt’s daughter. When Melissa took walks with her baby, she streamed classical music and sounds of nature through her smartphone which she rested in the infant seat. While she knew the benefits of classical music for brain development, putting a cell phone in the carrier was not the best way to expose brain-building melodies to her preemie. Made aware of the possible health risks associated with SAR radio frequency emissions from mobile phones and the thousands of germs that live on a person’s device, Melissa ceased this ritual and started looking for safer, cleaner alternatives.

Knowing the benefits of music for infants, she decided exposure to music should be available some other way for walks, shopping trips, or just hanging out in the carrier at grandma’s house, Unable to find what she was looking for on the market, Melissa took matters into her own hands and developed what is now Lil’ Jammerz™.  Using a plush toy on her daughter’s carrier she created a “homemade” version by cutting a hole and ripping the stuffing out.  She found a speaker that fits inside and …voila! The first Lil’ Jammer was born. Melissa wanted her creations to have a personality and to be interactive even when they are not playing music. And she needed a great name.  A musical toy…why not a rock band? After a handful or two of amateur drawings, and with help from a professional, the band was formed!  Its members are cute, lovable, and engaging. A name for this adorable posse was a must-have. When her husband, Marin, was a young child, his mom always called him “Lil’ Jammer.”  He rushed home from school, dropped his backpack and “jam” out with his surfboard to catch a wave. Lil’ Jammerz was the perfect name for the brand and makes it a family product.

R & D Efforts/Testing
Lil’ Jammerz will be available mid-September 2017 and will be sold in the US and Canada. The toys conform to the safety requirements of ASTM F963-16 and holds FCC certification.

New Introductions
Lil’ Jammerz Musical Friends recently debuted at the ASTRA Marketplace with a huge success. These three lovable plush toys will fit perfectly on an infant’s car seat, stroller, or carrier to entertain and engage a baby with streaming tunes of the caregiver’s choice. Lil’ Jammerz™ plays music and soothing sounds via Bluetooth technology, from any Bluetooth enabled device.
The user can play Internet radio, a personal music library, or through a pre-programmed playlist available via the free Lil’ Jammerz™ app. Lil’ Jammerz encourages a baby’s natural fascination with music to stimulate development, boost language skills, and strengthen the relationship between a parent and child. All three toys are visually stimulating and interactive so baby can be entertained with or without music. Mazzy the Microphone has a secret secure pouch that holds the Bluetooth speaker; JoJo, on percussion, gives a big squeak when squeezed, and Joon Bug, the groovy guitar, rattles. This band is equipped to rock your baby to sleep…or entertain while they rock on!