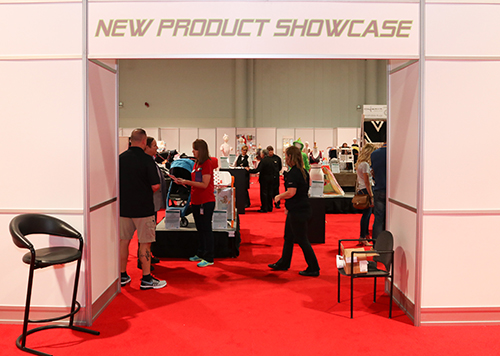 Seven winners of the ABC New Product Showcase Awards of Distinction were recently announced, ranging from a soothing center and rugs to insoles designed especially for maternity wear. The competition debuted during the 2016 ABC Kids Expo. The awards highlighted innovation and recognized the brands behind the new products. The recipients were chosen by popular votes awarded by participating trade media and specialty retailers during the New Product Showcase opening reception.

The following are the winners, by category, of the New Product Showcase Awards of Distinction:

The winners were announced during the Industry Reception at the 2016 ABC Kids Expo and were presented a crystal glass award and a certificate recognizing the company’s achievement. Award recipients were also interviewed and interviews can be viewed on the ABC Kids Expo Facebook page.

“We’re excited to have produced an awards program for this year’s ABC Kids Expo and thrilled by a large number of participants,” said Larry Schur, president and COO of All Baby & Child Corporation (ABC). “Each winner represents an innovation or something new that has been introduced to the juvenile products industry.” Schur also said, “we are very thankful for the huge number of specialty retailers and trade media that participated in the voting process.”

ABOUT THE ABC KIDS EXPO

ABC Kids Expo (All Baby & Child), founded in March 2003, is a partnership of juvenile industry manufacturers and
retailers organized for the purpose of promoting the children’s products industry. The main objective and purpose
of the corporation is to act as a business league that helps organize and put on trade shows to be held for the
benefit of juvenile products manufacturers, specialty store retailers, distributors and manufacturers’
representatives of juvenile products. With over 900 exhibitors utilizing 3,000 booths in nearly one million square
feet of exhibit space, it is currently one of the fastest growing trade shows in the nation and ranks 53 out of the
largest trade shows in North America. (Trade Show Executive 2016)