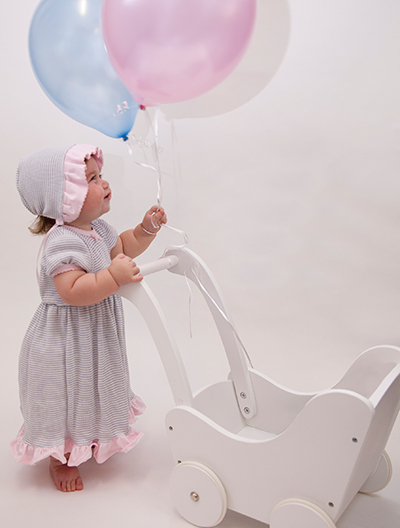 Paty, Inc. has roots that began in 1955 in a small garage in Lima, Peru, where Ruth and Faride Abugattas began what would become a life-long journey filled with hard work, determination, and success. For nearly 20 years, the Abugattas operated and grew the very successful infant apparel company from their home-town in Peru. Then, in 1970, seeking a better environment in which to continue to grow the company, they moved to the United States. In 1971, armed with new knitting machines from Germany, sewing machines from Italy, and a new 4,500 square foot facility in Houston, the Abugattas continued their passion for manufacturing high-quality infant apparel.

Forty years later, Ruth and Faride decided to retire and pass the reigns to the next generation of Paty owners. In 2010, local entrepreneurs Caren and Derrick Veillon purchased Paty, Inc. with a mission to expand the line and build an already strong brand.

In the past six years, Paty has remained true to its traditional roots by continuing to manufacture its Signature Paty Knit in Houston. The line has also been expanded to include new materials and designs that offer a fresh and trendy perspective on infant apparel. Today, Paty operates out of a 13,000 sq. ft. the manufacturing facility that serves thousands of retailers around the world and continues to provide the same high-quality children’s apparel that parents have adored for 60 years.

The company offers rompers, gowns, dresses, accessories, and gift sets available in eight sizes from preemie to 5T. Paty is also proud to announce their new Paty Essentials Packs that make ordering fast easy. The packs include a selection of their best selling items are always boxed and ready to ship from the company’s facility in Houston, TX.